The cost of launching a satellite varies depending on the satellite mass, the orbital altitude, and the orbital inclination of the final satellite orbit. Launch costs range from approximately $5000 per kg to LEO to $30,000 per kg to GEO. The cost of the satellite launch is exponentially related to the mission Delta V. Destinations beyond geosynchronous orbits (such as lunar transfer orbit and Mars transfer orbit) require even larger Delta Vs and correspondingly, require significantly higher launch costs per kg.

Using a Cannae-Drive-based system, payloads that are in a LEO orbit can be accelerated along the satellites orbital path. The increases to the velocity of the satellite raise the satellite orbit. In addition to the increased altitude of the orbit, orbital inclination changes can also be induced with the Cannae Drive system. The concept video below depicts a Cannae-Drive-thrusted vehicle which tows payload satellites from LEO to higher orbits.

The concept outlined in this section of the website is a space freighter that is based on the reactionless thrust of the Cannae Drive. This freighter is a satellite that is launched to LEO on a standard 5 meter fairing launch vehicle. Once in orbit, the freighter is used to raise the orbits of other satellites that are already in a LEO orbit. The value of the freighter is that significant reductions in launch costs are achieved. Satellites that are destined for orbits higher than LEO require only the launch costs associated with the LEO launch. For larger GEO satellites, the launch cost savings can amount to greater than $200 million per satellite. The launch configuration of the space freighter is depicted in Figure 1 below. 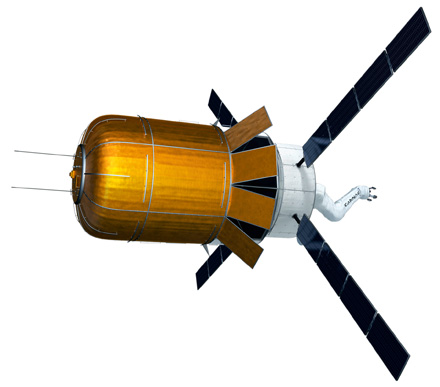 A rendition of the Cannae Drive cavity configuration is depicted in Figure 4 below. 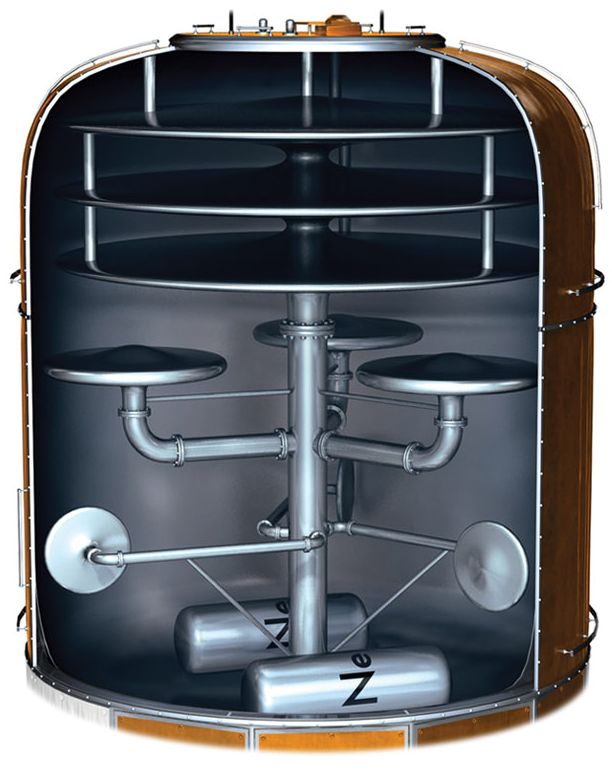 The steering Cannae Drive cavities are operated to steer the system of the freighter and payload. Modulation of the power into the steering cavities is used for orbital inclination changes and orbital corrections.

A GEO payload satellite of 10,000 kg mass is built and ready to launch. Currently, this satellite is launched on a rocket into a geosynchronous transfer orbit (GTO). The satellite then uses an apogee motor to circularize the orbit and correct the orbital inclination. The 10,000 kg GEO satellite must be launched on a heavy lift launcher such as a Delta IV heavy, an Ariane 5 ECA, or another heavy-lift launch system.

The Delta V required to change the payload inclination and orbit from LEO to GEO is assumed to be 2500 m/s. The combined mass of the freighter and the payload is 20,000 kgs. The total impulse required to raise this mass to GEO is 50 million kg-m/s. The freighter requires approximately 22 days of continuous operation at 40 Watts RF to impart this impulse.

During periods when the freighter is in the Earth’s shadow, RF power is sent into the thruster cavities by use of battery power. The neon gas in the cavity cooling chamber is allowed to increase in temperature during the pass through the Earth’s shadow. During exposure to sunlight, power is available to cool the neon gas. Using this method, continuous thrusting is achieved. The neon gas temperature fluctuates between 70 and 75 K. Neon gas is cooled to 70 K during periods of sunlight, and allowed to heat up to 75 K during periods of shadow. Continuous cooling of the cavities is accomplished without the use of battery power.

Because of the high Delta V requirements for launch of vehicles beyond GEO orbit, the size of deep space and planetary probes is significantly restricted by current launch limitations. The mass fraction of propellant required by the Delta V of the probe in addition to the payload limitation of the launcher limits the mass of the probe to a few tons. With the Cannae Drive freighter, deep space probes can be launched to LEO and then lifted to beyond GEO by the freighter. Once in a high earth orbit, the probe can use on board Cannae Drives to impart any additional Delta V required by the mission.